“you can cry on my shoulders as much as you want as well … trust me … Keep smiling”, “…i think im starting to like you”, “u should be asleep”

This is the kind of communicative support that we might like our children to experience within healthy digital relationships, from trustable others in their lives. Yet, sadly, these examples come from three digital conversations between online groomers and children. They are in fact typical of groomers’ use of trust-building talk – a communicative tactic that enables online groomers to manipulate children they target for sexual abuse. And trust-building talk is as salient as sex talk, which is what we tend reflexively to think of in a context of online child sexual grooming.

Those responsible for combating online child sexual grooming are well aware of different stimuli that influence how groomers establish and maintain abusive relationships with the children they target digitally. Situational factors undoubtedly play a significant role. These include digital affordances (e.g., privacy settings for different digital platforms), time and duration of digital contact (e.g., night-time; over a couple of days, weeks or months), place of contact (e.g., private space in the child-targets’ homes or public spaces such as a park), and so on. Socio-demographic and psychological factors – for example, age, gender, and mental state – are key too, both to groomers and their child-targets. However, for a long time now efforts to counter online child sexual grooming have been hampered by a failure to see it for what it really is, namely an abusive practice of communicative manipulation. Online child sexual groomers use language and other communicative means (e.g., emojis, images, videos) to persuade their child-targets to engage in sexual behaviour online and, sometimes, offline too.

The bad news is that the manipulation tactics involved in online child sexual grooming are highly sophisticated (see below) and therefore difficult for minors – and those of us who wish to keep them safe – to detect and resist. The good news is that we now have research-evidenced knowledge of what these tactics are and how children respond to them, meaning we can develop more effective detection and prevention resources. This is what Project DRAGON-S does, bringing together state of the art research in Linguistics, Artificial Intelligence, Criminology and Public Policy, and working collaboratively with stakeholders, to produce online child sexual grooming detection and prevention tools to support the work of child-safeguarding professionals and, hence, contribute to child safety online.

There is a tendency in some quarters to see online child sexual grooming (and other forms of abuse) as somehow less serious or damaging than offline abuse. This is not the case. The psychological trauma is profound, and the exchange of words and images is about and through sex acts. Children can, and at times, do resist online grooming - they recognise on some level that they have a right to be treated with respect and dignity in their digital relations, as in other facets of their lives. Nevertheless, the year-on-year increase of child sexual abuse and exploitation cases online testifies to how groomers’ power abuse and sophisticated tactical armoury create a confusing inter-actional context for children and constitute a major challenge to prevention and detection measures. Seeing and responding to online child sexual grooming as abusive manipulation through communication is therefore crucial to our collective efforts to safeguard children online. And by doing so projects such as DRAGON-S can, with the support and buy-in of all relevant stakeholders, make a major contribution to combatting this abhorrent form of sexual abuse and bring its perpetrators to justice. 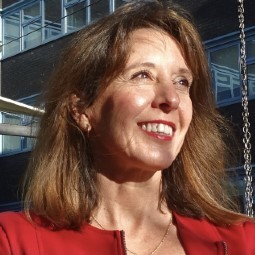 Nuria Lorenzo-Dus is Professor of Linguistics and Communication at Swansea University. She is the author of several books and over seventy journal articles and book chapters and has held visiting research positions in Argentina, Australia, Brazil, New Zealand, Spain and the USA. Her research examines interpersonal and intergroup communication in cyber-crime contexts, with a particular focus on child sexual grooming and ideological extremism.  Her research has attracted substantial research funding, including from United Kingdom Research Councils (e.g. AHRC and EPSRC) and charities (e.g. The Leverhulme Trust), and features extensive collaboration with academic teams and leading stakeholder groups worldwide. Nuria's latest initiative is Project DRAGON-S, financially supported by the End Violence Fund, which is developing linguistically informed digital tools to help counter online child sexual grooming globally.