Children's Rights in the digital world

Billy Joel, Belinda Carlisle, and Chris Rea are in the UK top ten.

Arsenal top the English First Division, while earlier in the year Wales have finished bottom of the Five Nations championship.

Margaret Thatcher is about to enter her final year as UK Prime Minister, while in the states, George W Bush Senior is at the end of his first year as US President.

It's also the month that the Convention on the Rights of the Child is formally adopted by the United Nations, outlining 42 rights that all children and young people have; the minimum requirements for growing up happily, healthily, and safely.

As Children's Commissioner for Wales, it's my job to promote and protect children's rights in Wales, making sure that they're at the centre of policy-makers' minds when they make decisions that affect children and young people.

Since the Convention was first published, dedicated children's rights champions across the world have made sure that its influence and reach has grown. In Wales, the UK's first Children's Commissioner role was created in 2001 to specifically hold the Government to account on their children's rights record. It was the first piece of legislation passed by the then Welsh Assembly Government. Ten years later, in 2011, it became law for Welsh Ministers to have due regard to children's rights when exercising their functions.

Coincidentally, the Convention, which has become the most widely ratified human rights treaty in history, was introduced in the same year that Tim Berners Lee wrote the first proposal for the World Wide Web.

While the rights outlined in the convention are the same today as they were over 30 years ago, the internet and the way it affects our lives continues to evolve at extraordinary pace.

Rights in action in the digital world

It's hard to think of a better recent example of children's rights in action, supported by digital connectivity, and on a global scale, than the young people's climate strikes over the past few years.

Being able to join groups and clubs, and to meet with friends is a right under the UNCRC. Children also have a right to have their say on matters that affect them.

Spearheaded by the inspirational activist Greta Thunberg, it's claimed that more than 1.4 million young people from around the world took part in climate strikes in 2019. This collective action was driven and led by young people who demanded to have their voices heard on a truly massive scale. Children and young people were enabled to do this in part by accessing their rights to expression and association through the internet.

Other powerful movements have included Everyone's Invited, which built on the #MeToo movement and is of course particularly relevant to this year's Safer Internet Day theme of Respect and Relationships. It has done more than raising awareness of young people's experiences of sexual harassment; it was the catalyst for an Estyn report into peer on peer sexual harassment in Wales' schools, the findings of which have strengthened the need for high quality Relationships and Sexuality Education, and have led to additional commitments by Welsh Government to take action to prevent sexual harassment in education.

Digital connectivity can also help to break down some of the barriers that young people might have faced in taking part in such movements in the past, perhaps because of their location, or their family circumstances, like whether or not their parents have the time or resources to help them to take part.

But how do we make sure that all children can experience their rights online? I've picked out three rights from the Convention below that represent timely and significant children's rights issues:

The pandemic has underlined the threat of misinformation, and the importance of equipping children and young people with the skills to challenge and scrutinise what they read. In a world where anybody can publish something and pass it off as real, this is an incredibly important skill that our new curriculum will have to tackle. Children and young people need to be able to wade confidently through the information all around them.

On a positive note, the pandemic also saw high quality, age-appropriate information produced by public bodies across Wales to help young children understand the virus. If we can do it for this, we can do it for all sorts of issues. Children and young people have a right to fully participate in the world around them; without information they can trust, they cannot do this.

Article 19 - right to be safe from harm

We're accustomed to supporting children to learn about the threats in the physical world, but making sure children understand threats and incidents that they encounter online is a much newer task that parents, carers, and schools are still getting used to. It certainly does require an effort from all of the adults in a child's life - and there are well-written guides for parents and carers on how to go about this in the best way at home. Tech companies also have to step up, and take their duty of care to young people far more seriously. The UK Government's Online Safety Bill, and the ICO's Children's Code, are testament to the now widely held realisation that we need proper regulation to keep users safe.

Article 2 - all children have rights, no matter what

Not all young people experience their rights equally, and that is the same when we think about children's rights online. We know that even getting online in the first place is harder for some children than others.

Device inequality has played a part in the difficulties young people have faced with remote learning during the past 2 years, and is closely linked to poverty. In Wales, almost 1 in 3 children live in poverty. Learning at home for periods during the pandemic really highlighted this inequality. Many devices were distributed but the inequalities have not been eliminated.

It's vital to children from all backgrounds that we keep listening to their experiences, and understanding the ways that inequalities affect online experiences, and therefore, quality of life.

There's no doubt that the internet has created so many different opportunities for young people to connect, to create, and to experience their rights.

But just as there are opportunities to experience their rights, there are also barriers.

When I meet with organisations across Wales, I always encourage them to work with the young people they serve to find the solutions, not just to tell them what they're going to do. After all, all children have a right to take part in the decisions that affect them.

It's down to tech companies and Governments across the world to make sure that young people can shape digital spaces they inhabit. As the Children’s Commissioner, the young people I meet are creative, sharp, and want to be involved in making a positive difference. And more often than not, they come up with excellent solutions. If they get a meaningful chance to shape the digital world, they'll make a better internet for all of us. 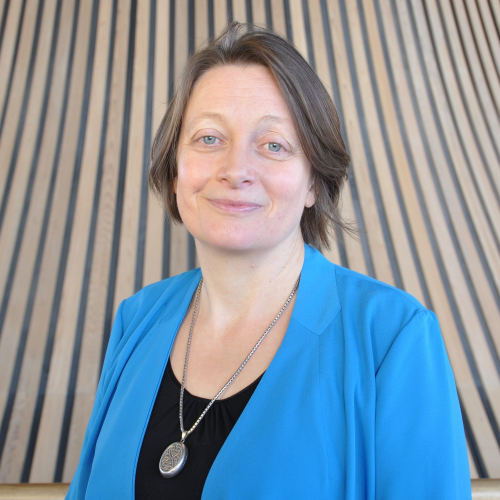 Sally Holland is a registered social worker with experience in the statutory and voluntary sectors. Before starting her job as Children’s Commissioner for Wales, she was a Professor at the School of Social Sciences at Cardiff University. During her time at Cardiff University she set up CASCADE Children’s Social Care Research and Development Centre.

Sally is originally from Scotland but has lived in Wales since 1992, and now speaks Welsh fluently.

During her time as Children's Commissioner, she has embedded children's rights in key pieces of legislation, ran internationally renowned 'Coronavirus and Me' surveys to gather young people's views of coronavirus lockdowns,  and campaigned for a change in the law to give children equal protection from assault.